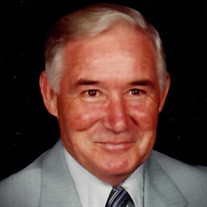 Neual Roy Hobbs, 96 of Springdale passed away Monday, December 16, 2019 at Circle of Life Hospice in Springdale. He was born November 29, 1923 in Denning, Arkansas to Tomie and Ola Mae Fears Hobbs. He was a World War II Veteran serving in the United States Army Air Corps. He was honorably discharged with the rank of Staff Sergeant; he served in Sudbury England, Station STA174, he was a combat crew member on the B24 and B17 as a tail gunner. He was awarded the European Command Battle Stars in the 8th Air Force. He completed thirty missions including Belgium, France, Germany and flying the D-Day Mission on June 6, 1944. He earned the Air Medal with 3 Oak Leaf Cluster Medal and the Liberation of France Medal. He was a Charter Member of Elmdale Baptist Church in Springdale where he was active in church serving in various positions including, Sunday School Teacher, Church Trustee and Usher. He was a retired dry goods salesman, a member of the Springdale Country Club and he enjoyed playing golf. He was preceded in death by his parents, his wife, Joyce Fern Hobbs; one son, Ronald Ray Kear and daughter-in-law, Susan Kear; three brothers, William Fay Hobbs, Garland Hobbs and Bill Morris. Survivors include two sons, Roy Hobbs and wife Sarah of Springdale and Gene Hobbs and wife Pam of Farmington; one daughter, Patsy Stevens of Kansas; two sisters-in-law, Peggy Hobbs of Van Buren and Frances Morris of California and numerous grandchildren and great grandchildren. Graveside services will be Monday, December 23, 2019 at 1pm at Woodlawn Memorial Park in Fort Smith Arkansas. Visitation will be Sunday, December 22, 2019 from 4 to 6pm at Sisco Funeral Chapel of Springdale. Memorials may be made to your favorite charity in his memory. Online condolences may be left at www.siscofuneral.com

Neual Roy Hobbs, 96 of Springdale passed away Monday, December 16, 2019 at Circle of Life Hospice in Springdale. He was born November 29, 1923 in Denning, Arkansas to Tomie and Ola Mae Fears Hobbs. He was a World War II Veteran serving in the... View Obituary & Service Information

The family of Neual Roy Hobbs created this Life Tributes page to make it easy to share your memories.

Send flowers to the Hobbs family.