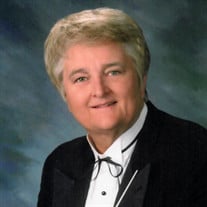 ﻿PATRICIA A. “PAT” ELLISON age 76 of Bella Vista died February 14, 2021 in Springdale. Born April 20, 1944 in Fort Smith, Ark. to Herbert Lee Ellison and Dolores Wallen Ellison. Her early years were spent in Yokohama, Japan; Paris, France; and several U.S. cities before her family settled in Fort Smith. After graduation from Fort Smith High School, she completed her collegiate education at Arkansas Tech University (ATU) and the University of Northern Colorado. Upon graduation from ATU in 1966 with a degree in Music Education, she became the assistant band and choral director at Fayetteville High School. Her 35-year career as an Arkansas music educator also included assignments at Gardner Junior High School in Russellville, Woodland Junior High School in Fayetteville, and Springdale where she became director of bands at Springdale High School and the coordinator of instrumental music for the school district in 1979. Pat was chairman of the Springdale High Fine Arts Department and a member of the Springdale High Curriculum Council for 23 years. In 1992, she became director of the Springdale Performing Arts Center. Her career included many state and national clinician and guest conductor appearances. Pat received numerous honors and awards including the 1975 American School Band Directors Association-Stanbury Award, 1977 and 1984 Tau Beta Sigma Outstanding Service to Music Award, 1991 Arkansas Bandmaster of the Year, and 1993 Springdale Teacher of the Year. She was inducted into the Arkansas Bandmasters Phi Beta Mu Hall of Fame in 2003 and ATU Hall of Distinction in 2007. Pat was recognized in 2014 as Springdale Public Schools Education Foundation Retiree Cornerstone Recipient. She was the first female president of the Arkansas School Band and Orchestra Association and served as president of the Arkansas Bandmasters Association. For “Miss Ellison” it was all about her students and the music. She encouraged each one to excel personally and musically. Awards and trophies were not the goal. Achieving one’s best and being a good citizen came first. In 1993, the Springdale High School band accepted an invitation to perform a concert at the prestigious Mid-West International Band and Orchestra Clinic in Chicago. She repeatedly refused invitations for her bands to perform across America, believing expensive trips should have strong educational values. To that end, she began a tradition of tri-annual SHS band trips to march and perform in the Nation’s 4th of July festivity and parade in Washington DC. These trips were packed with public performances at and visits to the Capitol’s landmarks, music venues, museums, the White House, and the US Capitol. Her legacy lives on in the thousands of students she influenced. After retirement in 2001, she tirelessly devoted her time and talent to Springdale public school music, as well as serving as director of the Ozark Mountains British Brass Band. She is preceded in death by her parents and survived by sisters Barbara (Edward) Hancock of Springdale and Joan Ellison of Little Rock; nephew Michael (Kelly) Hancock, Madeleine and Sebastian of Norman, OK; several cousins; her very close friend Sandy Trigg; and many music, golf, and travel friends. A celebration of life will be held on Saturday, November 13, 2021 at 1 PM at the theatre at the Performing Arts Center at Springdale High School. In lieu of flowers the family requests that donations be made to the Pat Ellison Memorial Fund through Springdale Public Schools.

The family of Patricia A. "Pat" Ellison created this Life Tributes page to make it easy to share your memories.

Send flowers to the Ellison family.