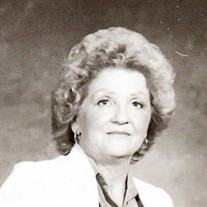 Peggy Ellen Glenn, 86 of Springdale passed away October 8, 2020 at Willard Walker Hospice in Fayetteville. She was born February 20, 1934 in Steprock, Arkansas to Arch Talley and Myrtle Bowers Talley. She attended high school in Pangburn, Arkansas. Peggy married Thomas Milton Glenn on January 10, 1951. She was the retired owner and operator of Peggy’s Cleaners in Fayetteville, Arkansas since 1967. She attended the Baptist church. She was preceded in death by her parents; her son Tommy Glenn, and one brother, Jack Talley, and four older sisters, Francine Martin, Louise Brown, Alma Vaughn, and Martha Galloway. She is survived by her two daughters; Tish Conway, her husband Joseph Conway of Bodega Bay, California; three grandchildren and six great grandchildren, and Ramona Piazza, her husband Rick Piazza of Tontitown, two grandchildren and two great grandchildren, and many nieces and nephews. Peggy was the model of a strong independent thinking woman. She maintained a balance with her adventurous, fun-loving style, and her way of making people feel welcomed. She was generous with her time, talents, and resources. She adored spending time with her family: children, grandchildren, and great grandchildren and socializing with her many friends and family members. She liked to go out dancing. She loved to work in her flower gardens. Going to the lake, camping, and water skiing were a major source of joy for her. She enjoyed sports, especially University of Arkansas football. She had the opportunity to take several trips with her friends that were a source of delight for her. Peggy was laid to rest at Bluff Cemetery. Due to Covid-19 restrictions, we will not be having a memorial service. However, we encourage you to share your stories and memories of Peggy on the Sisco Funeral Chapel website tribute page. Donations can be made in her name to the Frank and Barbara Broyles Foundation, that has a focus helping Alzheimer's caregivers. Online condolences at www.siscofuneral.com

The family of Peggy Ellen Glenn created this Life Tributes page to make it easy to share your memories.

Send flowers to the Glenn family.