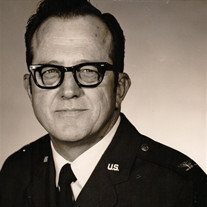 Colonel Pierce Lane Smith, 92, passed away peacefully on February 6, 2020 in the Willard Walker Hospice Home in Fayetteville, Arkansas. He is survived by his wife, Margaret Smith, his daughter, Deborah Sue Palmtag, two grandsons, Michael Hoesing and Scott Leach, one stepson, Peter Van Crosby, one stepdaughter, Carrie Ann Esposito, and one step-grandson, Scott Leach. He was preceded in death by his son, James Russell Smith, one step-grandson, Brian W. Leach, his parents, Sigsbee James Smith and Wilma Reba Farrar Smith, three brothers, Frank Martin Smith, Bobby Dane Smith and Skip Smith, and one sister, Marilyn Loraine Smith Lewis. Pierce was born on October 1, 1927 in Muskogee, Oklahoma, and when he was 14 years old, he and his family were stationed in Hawaii on the tragic day when Japan entered World War II by attacking the U.S. Naval Base at Pearl Harbor. He often discussed and described the events of the attack throughout his life in vivid detail. This event shaped his future, and he quickly entered the U.S. Maritime Service in 1945 to contribute to the war effort, which started his long service to his country in the U.S. Military. He served in the United States Maritime Service from January 1945 to August 1945 aboard fuel tankers in the Pacific Ocean. He returned home after the war and in January 1946 graduated from high school in Springdale, Arkansas. Colonel Smith holds a Bachelor of Arts degree in General Education earned from the University of Omaha, Nebraska in 1964 and a Master of Science degree in Business Administration from George Washington University in 1965. He enlisted in the Army Air Corps in February 1946, serving at Sheppard Air Force Base, Texas, and then at Lackland Air Force Base, Texas, as a supply technician until December 1952. After receiving his commission as a distinguished graduate of Officers Candidate School in June 1953, Colonel Smith attended intelligence photo radar interpretation school at Lowry Air Force Base, Colorado from July 1953 to June 1954. He then worked briefly with the 544th Reconnaissance Technical Squadron, Offutt Air Force Base, Nebraska. In October 1954, he was assigned to the 3921st Reconnaissance Technical Squadron Royal Air Force Base Station, Drayton, England, serving as a photo interpreter developing air target charts and radar predictions. After returning to the United States in October 1957, he was assigned as a photo interpreter developing air target charts for the 15th Reconnaissance Technical Squadron, March Air Force Base in California. During this period, he attended Squadron Officers School at Maxwell Air Force Base in Alabama. From October 1959 through July 1964, Colonel Smith served as a missile operation staff officer at Headquarters, Strategic Air Command, Offutt Air Force Base, Nebraska, where he was Project Officer for trajectory computation programs used to target Snark, Atlas, and Jupiter missiles. Colonel Smith attended Air Command and Staff College at Maxwell Air Force Base, Alabama, from July 1964 to July 1965, and then returned to Headquarters Strategic Air Command as a Missile Operation Staff Officer. He worked as Project Officer in the development of the trajectory computational program for Minuteman F and Minuteman G missile systems. From May 1970 through January 1973, he was assigned to the Joint Strategic Target Planning staff, Offutt Air Force Base in Nebraska. There, he performed duties as Chief of Missile Combat Target Team, Chief of Combat Targeting Teams, and Chief of Penetration Analysis Branch. In January 1973 he assumed the duties of Deputy Commander of Operations for the 91st Strategic Missile Wing, Minot Air Force Base in North Dakota, moving up to the Vice Commander in April 1974. And finally, Colonel Smith took over as Commander May 5th, 1975. Pierce has been awarded the Legion of Merit Air Force Commendation medal, Air Force Outstanding Unit Award with two Oak Leaf Clusters, Army Good Conduct Medal, World War II Victory Medal, National Defense Service Medal with Star, Air Force Longevity Service Award Ribbon with six Oak Leaf clusters, and the Small Arms Expert Marksmanship Ribbon. Pierce retired in 1976 at the rank of Colonel, and Commander of the 91st Strategic Missile Wing, Minot Air Force Base in North Dakota, and proceeded to enjoy 44 years of active and happy retirement. Colonel Smith was formerly married to Bette Glynn Kelly of Eagle Pass, Texas, who sadly passed away on November 13, 1998. In retirement, Pierce enjoyed fishing and golf, and in 1999 Pierce met his second wife while golfing, Margaret Robinson, and they were married shortly thereafter, and they spent 20 happy years together. Funeral Service will be on Wednesday, February 12, 2020 at 10 a.m. at Sisco Funeral Chapel, after which a gravesite military service will be performed at Bluff Cemetery, Springdale. In lieu of flowers, please make donations to the Willard Walker Hospice Home 325 East Longview Street, Fayetteville AR 72703. Online condolences may be left at www.siscofuneral.com

The family of Col. Pierce Lane Smith created this Life Tributes page to make it easy to share your memories.

Send flowers to the Smith family.