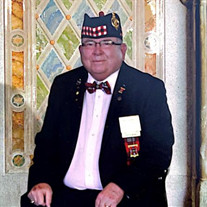 Randy George, 69, of Springdale, passed away on February 20, 2022 at Northwest Medical Center in Springdale. He was born on November 19, 1952 in Springdale to Billy Joe George and Peggy High George. Randy was a US Army and Arkansas National Guard veteran. He was stationed at Fort Leonard Wood, Fort Benning, Vilseck, FRG, attached to UK2 Para Regiment during Falklands Crises as an observer, Fort Ord, and Fort Sill. During his service he was assigned to Military Assistance Command (NATO Europe) for duties in Europe, the Middle East, and North Africa. As a National Guard veteran he participated in Desert Shield/Desert Storm in Iraq. His commendations include: the Soldier’s Medal (peacetime), Bronze Star, Army Commendation Medal, Army Achievement Medal, Good Conduct Medal, National Defense Service Medal, SouthWest Asia Medal, Kuwait Liberation Medal, Basic Airborne Wings, Queen’s Medal (Falklands) UK. Randy was a Freemason and a member in good standing of Springdale Masonic Lodge #316 and Washington Masonic Lodge #1 in Fayetteville. He was also a member of other Masonic appendant bodies including York Rite Masons, a 32nd Degree Scottish Rite Mason, Amalric Grotto, and past President of National Sojourners. The discipline and patriotism he learned in the US Army never left him as friends and family will attest. Randy served as Post Commander of Springdale VFW Post #2952 and was a dedicated leader in the development of Eagle Scouts in The Scouts community. Randy will be missed by all those he knew in the Springdale Community. He lived his life to improve others. His physical time on Earth will live on through all those he has impacted. He is preceded in death by his parents and three children, Tracey Lynn, Frances Ann, and Anna Marie. Survivors include, his wife, Vicki George of the home; one daughter, Trisha George and Darryl Schreffler of Springfield, Missouri; one son, Jon George and wife Brittni of Rogers; and two grandchildren, Art William George and Alice Aldea George. Visitation will be Sunday, February 27, 2022 from 2 PM to 4 PM at Sisco Funeral Chapel in Springdale. Services will be Tuesday, March 1, 2022 at 11 AM at St. Thomas Episcopal in Springdale with Pam Morgan officiating. Interment will follow at Fayetteville National Cemetery. Memorial donations can be made to VFW Post #2952 or St. Thomas Episcopal church in Springdale. Online condolences can be left at www.siscofuneral.com

Randy George, 69, of Springdale, passed away on February 20, 2022 at Northwest Medical Center in Springdale. He was born on November 19, 1952 in Springdale to Billy Joe George and Peggy High George. Randy was a US Army and Arkansas National... View Obituary & Service Information

The family of Randy George created this Life Tributes page to make it easy to share your memories.

Send flowers to the George family.