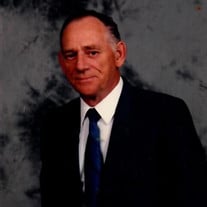 Raymond Gene Moss, 83, of Springdale, Arkansas passed away peacefully on July 28, 2019. He was born on June 10, 1936 in Oakford, Illinois, the son of Walter and Louella (Petigo) Moss. He is survived by his wife of 63 years, Georgia (Goldsborough) Moss, his daughter and son-in-law, Lyn and Dennis Edington of Greenland, his grandson, Jake, of Fayetteville, one brother, Claude Moss, of Dawson, Illinois, one sister, Joan Atterberry, of Tallulah Illinois, many nieces and nephews and his beloved terrier, Jackie. Ray was preceded in death by his infant son, Greg, his parents and four sisters; Dona Clifford, Twila Miller, Loretta Boehm and Rhonda Horn. He was a U.S. Army veteran with 22 years of service and fought in Korea and Vietnam. After he retired from the Army he began a second career with the Arkansas Unemployment Career Center in Fayetteville where he helped many families. He was a devoted husband, father and grandfather. He had many interests throughout his life including hunting and fishing, training beagles for field trials, and trading trucks and boats. He was an avid and accomplished fisherman. His favorite place in the world was on the lake fishing with one of his fishing buddies. Cremation arrangements are with Sisco Funeral Chapel in Springdale. A graveside memorial will be held at the Fayetteville National Cemetery at a later date. In lieu of flowers, the family suggests a memorial to Circle of Life Hospice, 901 Jones Road in Springdale. The family would like to thank the staff of the Circle of Life Hospice for the loving care he received. Life is short. Fish more often, hug your loved ones and pets and support your local animal shelter. Online condolences may be left at www.siscofuneral.com

Raymond Gene Moss, 83, of Springdale, Arkansas passed away peacefully on July 28, 2019. He was born on June 10, 1936 in Oakford, Illinois, the son of Walter and Louella (Petigo) Moss. He is survived by his wife of 63 years, Georgia (Goldsborough)... View Obituary & Service Information

The family of Raymond Gene Moss created this Life Tributes page to make it easy to share your memories.

Send flowers to the Moss family.