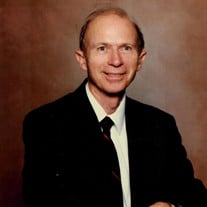 Reuben S. Blood, Jr., 86 of Springdale passed away Friday, February 5, 2021 at Circle of Life Hospice in Springdale, He was born October 2, 1934 in Fayetteville to Reuben S. Blood, Sr. and Grace Joiner Blood. Reuben served in the Arkansas National Guard. He was a patrolman for the Springdale Police Department and was promoted as the department’s first Detective, he left the department to start Blood Accounting and was later employed by Walmart working in the loss prevention department. He was a founding and current member of Heritage Baptist Church in Nob Hill. He and his parents were also founding members of University Baptist Church in Fayetteville. Reuben’s biggest accomplishment in his life was his family. Other interests included hunting, fishing, playing chess and photography. He was a master gardener and started the community garden in Springdale. He was an expert marksman competing in both smallbore and centerfire rifle events. He was preceded in death by his first wife, Mary Belle Blood and one sister, Charlotte Smith. Survivors include his wife, Wanda Blood of the home; three sons, James R. Blood and wife Patti of Fayetteville, James Richard Chappelle and husband Travis Beedy of Kansas City, Kansas and Dale Robert Chappelle and wife Tori of Harrison, AR; five daughters, Ann Swift and husband Kelvin of Springdale, Becky McCall and husband Ricky of Springdale, Joletta Chappelle of Siloam Springs, Arkansas, Karla G. Thompson and fiance Robert Hunsaker of Harrison, AR and Delberta Larsen and husband Kelly of Fayetteville, twelve grandchildren and twenty great grandchildren. Funeral services will be Wednesday, February 10, 2021 at 2pm at Sisco Funeral Chapel with Pastor T.O. Spicer and Pastor David Dodson officiating. Burial will follow in Sons Chapel Cemetery. Visitation will be Tuesday from 6 to 8pm at the funeral home. Memorials may be made to the American Cancer Society. Online condolences may be left at www.siscofuneral.com

The family of Reuben S. Blood Jr. created this Life Tributes page to make it easy to share your memories.

Send flowers to the Blood family.