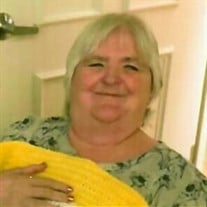 Rose (Rosie) Marie Lawson, 72 of Springdale, Arkansas, passed peacefully in her sleep Thursday evening, December 26, 2019 at Edgewood Health and Rehab in Springdale. She was born January 7, 1947 in Minnesota to Leroy and Vivian (Nyblom) Lehman. Rose became acquainted with the Williams family in April of 2005 at which time she was living on a $500.00 a month pension in a motel room she was being charged $450. 00 per month for. Shortly after that she was diagnosed with breast cancer that required surgery. After being dismissed from the hospital Kim took Rose into her home and cared for her until a permanent home was found for her at Rocking Chair Inn (an assisted living facility) in Springdale. At this time Kim became her POA for medical care a position she held until Rose’s death. Rocking Chair Inn was a good fit for Rose, and it became home, she had many friends both there and in her Sunday School Class at Cross Church. Kim’s family adopted Rose as one of their own and she became a part of the Williams family. Kim was “Sis” to Rose and Kim’s mother was “Mom.“ After Rose developed health issues that required more surgery and more care than they could give her at Rocking Chair she became a resident at Edgewood Manor (formerly Western Grove) in Springdale where she resided happily the remainder of her life. Rose’s love for people soon enabled her to make new friends, she loved Bingo (especially loved winning) Crossword Puzzles, Word Search, Crocheting and the numerous activities at Edgewood Manor where she in turn was loved and well cared for. Rose was very kindhearted and loved doing for others. She would make quilt tops for friends (every stitch done by hand) embroider pillowcases and make other crafts which she would give to her doctors as well as her friends. December 26 had been an ordinary day for Rose, laughing and visiting with friends at Edgewood Manor, in the evening she told them she was tired and wanted to lie down, this was typical for Rose. She was helped to bed and at seven-thirty when staff went to check on her, she had peacefully left this earth for her Heavenly Home. Rosie was preceded in death by her parents, first husband, Donald Fritzen of Pettigrew, Arkansas, second husband, Jesse Lawson of Huntsville, Arkansas; brothers: Clarence Lehman, Leroy “Hank” Lehman, and Roger Lehman of International Falls, Minnesota.; sisters, Dorothy Woodbridge of International Falls, Minnesota. and Karen Noordhoek of Springfield, Missouri. She is survived by brother Paul Lehman, Sr. of St. Cloud, Minnesota, sister Bonnie Young of Mesick, Michigan, nephew Chad Brown and wife Lisa of St. Paul, Arkansas, numerous nieces and nephews, and dear Williams’ Family friends of Berryville, Huntsville, and Bella Vista, AR. Per Rose’s wishes she was cremated, and her nieces and nephews chose to have a private family Memorial for her. Rose’s adopted family, The Williams, all have wonderful memories of times shared which they will hold forever in their hearts, and we thank God for allowing us to be a part of Rose’s life for fifteen special years.

The family of Rose (Rosie) Marie Lawson created this Life Tributes page to make it easy to share your memories.

Send flowers to the Lawson family.