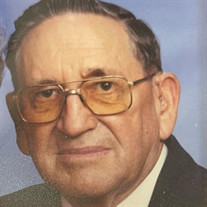 Roy Grimsley, 91, of Springdale passed away on March 23, 2021. He was born on November 20, 1929, in Springdale to Elbert and Carrie Grimsley. Growing up on a farm during the Great Depression, he learned the benefits of hard work. In high school he bought a Jersey heifer and sold milk from his dairy cows to fund his college. Years afterwards, he accumulated land for his own farm…raising chickens, cows and grapes. Roy studied Animal Science at the University of Arkansas, majoring in poultry. He was one of the first employees of Tyson Foods, starting in September of 1952, and spent most of his career in Grower Relations. After 42 years, he retired in 1994. During his time at Tyson, Roy also served on the Board of Directors for J.B. Hunt Company for 25 years. Roy was a pillar of Spring Creek Missionary Baptist Church. At the age of 13, he accepted Christ as his Savior and remained a member of Spring Creek for over 77 years, serving as a deacon, Bible study teacher, clerk and song leader. He was also active in Gideons International for over 25 years. He is preceded in death by his parents; first wife, Katie M. Grimsley; one daughter, Sherri Grimsley, and two brothers, Leonard Grimsley and Joe Grimsley. Survivors include his wife, Donna Grimsley; one son, Bryan Grimsley and wife Brenda; two daughters, Karen Ward and husband Tommy, and Leah Darling and husband David; four step children; one sister, Maida Ryker; nine grandchildren, Sean Ward, Carrie Ward, Sarah Reid, Rachel Carpenter, Mitchell Tice, Stewart Tice, Mara George, Alyssa Donley, and Reese Grimsley; five step-grandchildren; six great-grandchildren, and nine step-great grandchildren Visitation will be Friday, March 26, 2021, from 5 PM to 7 PM at Sisco Funeral Chapel in Springdale. Services will be Saturday, March 27, 2021, at 10 AM at Sisco Funeral Chapel in Springdale. Jimmy Tollison will be officiating. Interment will be at Spring Creek Cemetery in Springdale. Pallbearers will be Sean Ward, Malcolm Carpenter, Kile Donley, Mitchell Tice, Stewart Tice, and Drew George. Memorial donations to Spring Creek Missionary Baptist Church or Gideons International. Online condolences can be left at www.siscofuneral.com

Roy Grimsley, 91, of Springdale passed away on March 23, 2021. He was born on November 20, 1929, in Springdale to Elbert and Carrie Grimsley. Growing up on a farm during the Great Depression, he learned the benefits of hard work. In high school... View Obituary & Service Information

The family of Roy L. Grimsley created this Life Tributes page to make it easy to share your memories.

Send flowers to the Grimsley family.