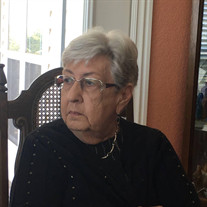 Sammye Jewel Hickey Gilbert, 84 of Alma, Arkansas passed away January 21, 2020 in Springdale due to complications associated with a stroke she suffered in December of 2018.. She was born July 11, 1935 in Granbury, Hood County, Texas to Samuel Arthur and Jewel Bird Hickey. Sammye was a retired real estate broker in New Orleans Orleans Parish, Louisiana, USA, 1978 thru 1995 for Real Estate Broker Stan Weber which became Latter and Blum. She was one of their top salespersons and managed the New Orleans West Bank office 15 years. She retired from real estate in 1995 and was office manager for Gilbert Engineering Services LLC, Belle Chasse, Louisiana. She was Captain of the 1968 Krewe of Neophermenos in New Orleans, LA. She was an exceptional seamstress having designed and made dozens of Mardi Gras costumes. She loved to knit and made many one of a kind treasures for family and friends. She was active in the Belle Chasse United Methodist Church, particularly is the missions program helping to sponsor several missionaries. She was a member of the Heritage United Methodist Church of Van Buren. Her activities at Heritage were limited by health challenges. She was active in the PEO Organization both in New Orleans and the Fort Smith area. She lived in many areas of the country including, Mineral Wells, Texas; Lubbock, Texas; Birmingham, Alabama; Fort Worth, Texas; New Orleans, LA; Belle Chasse, LA and Dyer, Arkansas. She was preceded in death by her siblings, Mary Kathryn Hickey Massey and Myrtle Gene and her parents. Survivors include her husband, James Gordon Gilbert of the home; two sons, Mark Steven Gilbert and wife Dana of Alma, Arkansas and Michael Bradley Gilbert and wife Cathy of Rogers, Arkansas; one brother, Charles Edward Hickey of Mineral Wells, Texas; five grandsons, Frederick, Wyatt, Zane, Eric and Daniel, six great-grandchildren and nine nieces and nephews. A memorial Service will be held on Saturday January 25th at 11:00 A.M. at Heritage United Methodist Church, 1604 Pointer Trail, Van Buren, AR 72956 In lieu of flowers, memorial donations may be made to the Food Pantry and Clothes Closet at Heritage United Methodist Church, 1604 Pointer Trail, Van Buren, AR 72956. Online condolences may be left at www.siscofuneral.com

Sammye Jewel Hickey Gilbert, 84 of Alma, Arkansas passed away January 21, 2020 in Springdale due to complications associated with a stroke she suffered in December of 2018.. She was born July 11, 1935 in Granbury, Hood County, Texas to Samuel... View Obituary & Service Information

The family of Sammye Jewel Hickey Gilbert created this Life Tributes page to make it easy to share your memories.

Send flowers to the Gilbert family.