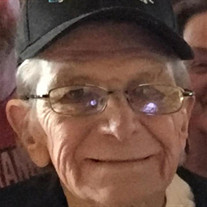 Steven Allen Sargent, 69, entered his heavenly home on January 13, 2020 surrounded by those he loved. He was born on April 10, 1950 in Burlington, Iowa to Clyde and Wanda Sargent. He moved to Springdale in 1982 where he met and married the love of his life. Steve took a position at Decision Point in Springdale and worked hard, rarely taking time off, earning the position of Executive Director. He later transferred to Tyson Foods where he worked in the computer room, and finished his working career as a security guard for Allied Universal. Steve was an avid fan of anything sci-fi related. His favorite part of the food pyramid was the sweets portion at the very top and he drank coffee with every meal. He loved to go camping in his RV and was very good at manning the grill. Time spent with family was the best and he was a fabulous stand-in Easter Bunny on multiple occasions. He was a member of St. Raphael’s Catholic Church in Springdale. He is preceded in death by his mother, Wanda Sargent; his father, Clyde Sargent; his father-in-law, Ken Brock; his mother-in-law, Kathleen Brock; two brothers-in-law, Joe Brock and Mike Renneker; and a sister-in-law, Karen Brock Renneker. Survivors include his wife of 36 years, Vicki Sargent of the home; sister-in-law Kathy Boeckman and husband Jerry of Scammon, Kansas; sister-in-law Diana Brock of Bedford, Texas; brother-in-law Kenny Brock and wife Kelly of Independence, Missouri; brother-in-law Jeff Brock of Springdale; numerous nieces, nephews, great nieces, and great nephews; and many fur children who adored him as much as he adored them. Mass of Christian Burial will be Monday, January 20, 2020 at 10:00 a.m. at St. Raphael’s Catholic Church with Fr. John Connell officiating. Burial will be at St. Joseph’s Cemetery in Tontitown. Visitation will be Sunday from 2:00 p.m. to 4:00 p.m. at Sisco Funeral Chapel in Springdale, followed by a Rosary service. Pallbearers are Michael Brock, David Brock, Kenny Boeckman, Christopher Boeckman, Shawn Johnson, Johnathan Parson, Bobby Brock, and Mike Miller. Honorary Pallbearers are Kenny Brock, Jeff Brock, Jerry Boeckman and Eric Gilbert. In lieu of flowers, memorials may be made to the Springdale Animal Shelter, 321 E Randall Wobbe Ln, Springdale, AR 72764. Online condolences may be left at www.siscofuneral.com

Steven Allen Sargent, 69, entered his heavenly home on January 13, 2020 surrounded by those he loved. He was born on April 10, 1950 in Burlington, Iowa to Clyde and Wanda Sargent. He moved to Springdale in 1982 where he met and married the love... View Obituary & Service Information

The family of Steven Allen Sargent created this Life Tributes page to make it easy to share your memories.

Send flowers to the Sargent family.