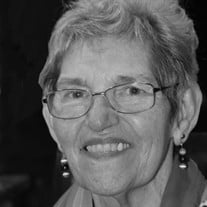 Susan Pauline O’Neal nee LaFrance March 2, 1943 – July 8, 2020 Springdale, Arkansas A creative lady, amazing cook and finder of all good deals, Sue O’Neal passed away on July 8, 2020. She is survived by her husband of 55 years, Tom O’Neal, who was an inspiration, for his unwavering caretaker skills and commitment to Sue; her daughter Christine Meier, her husband, Randy, and their five children – Scott Meier, Lori Gladden, Robert Meier, Ryan Meier and Jordan Meier and seven great-grandchildren; and her son, Sean O’Neal, his wife, Jennifer O’Neal, and their three children – Natalie O’Neal, Caroline O’Neal, and Spencer O’Neal Sue was born in New Bedford, Massachusetts to Pauline and Edmond LaFrance during World War II. The oldest of three children, she is survived by her youngest brother. Peter LaFrance (Christine), of Freehold, NJ and preceded in death by her younger brother, Ed (Donna), who would call her every day before he passed, just to check on her. She graduated from Freehold High School just a few years before Bruce Springsteen, whom she had the chance to hear before he made it big. A graduate of Douglass College, a part of Rutgers University-New Brunswick where she received a degree in home economics. Douglass was specifically designed for women’s studies. She met her husband who was attending Rutgers at college, and they were engaged on the boardwalk on the beach in the seaside city of Asbury Park, New Jersey. After marrying her officer, she and her gentleman traveled from New Jersey to Montgomery, Alabama; El Paso, Texas; Clark Air Base, Philippines; and Kincheloe Air Force Base, Sault Saint Marie, Michigan. Civilian life began in Richmond, Virginia then onto Martinsville and Williamsburg, Virginia; Amherst, Ohio; and Bella Vista, Arkansas as a hospital administrator’s wife, where she was active in local politics, women’s organizations and the League of Women Voters. One of her proudest moments was receiving the key to Bentonville for a day, presented to her and Tom by the hospital board and the city. Her final move was to Springdale, Arkansas, where she would finally retire. She would spend the last two years of her life in the house, she could honestly say she loved the best. A cottage nestled in the 55+ retirement community, Vincenza Villa. She loved the home, the people and the community. She looked forward to happy hour every day, she might not have had a drink, but she could not wait for the olive out of Tom’s glass. Not known to be tidy, as she had better things to do, she was an avid crafter, artist, chef, reader, and friend. When she was not working in a hospital gift store, sewing shop or teaching, she was volunteering her time to a good cause. She was instrumental in helping the deserving earn a degree, promoting everyone’s right to vote and her strong belief that everyone is created equal and should be treated that way. Sue never left the house without a colorful outfit, matching jewelry and bright lipstick. So, proud of her children, grandkids and watching the great grandkids run about. Her unique sense of humor, let her make those around her laugh. Sue was comfortable preparing a meal for 2 or 200, never met a word she did not know and was committed to causes she believed in. She did not even flinch when unexpected guest, Helen Walton enjoyed a meal, as part of a fund raiser dinner at Sue’s home. A life-long member of American Association of University Women, president of the local chapter and she was the state president for Arkansas. She was part of the AAUW national organization spending many days in Washington, DC promoting women’s issues. She was an advocate for women’s education, rights and helping those in need. She loved music and the arts and was honored to support them in a number of different ways including being a board member for the Cleveland NPR radio station and a member of the Symphony board in NW Arkansas. She loved all music, but jazz was her favorite and oh could she dance. She knew the words to almost every song. She loved movies, plays and just about anything on a stage both big and small. She specifically loved going to the movies, even the foreign sort. The walls of their home are filled with pieces of art collected along the way and in support of local artists she so admired. Sue’s love of art, made her feel right at home working for the family business, DMD Industries, where she ran the little store and she would always run into people she met back in the day. She was also a founding volunteer at the Crystal Bridges Museum working in the children’s art area. Her travels took her around the world from adventure in Thailand and Ireland to Caribbean Islands and most states in the US. She collected cookbooks of all flavors and loved making and eating foods from every nationality/ ethnicity. The family would like to thank friends and family who contributed to the amazing life Sue enjoyed, the hours of laughs and the kind words, that really did make a difference. Her jewelry will be put away, her many clothes donated and she will live in our hearts forever. Sue passed away during a difficult time in our country and with the threat of a virus all around that she did not catch. We will honor her with a virtual ceremony and she will lay to rest in the Fayetteville Arkansas National Cemetery. For those interested in making a donation in her honor may we suggest a contribution to AAUW, her favorite organization, or Circle of Life Hospice, Springdale, Arkansas, where she spent her remaining days. We love you, Sue! You might enjoy learning more about her www.sueoneal.com

The family of Susan Pauline O'Neal created this Life Tributes page to make it easy to share your memories.

Send flowers to the O'Neal family.