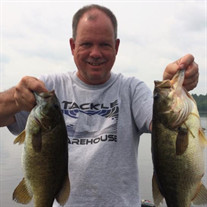 Ted S. Dossett of Gentry, Arkansas died Friday, September 18th, 2020. Ted Skylar Dossett was born on July 23rd, 1965 to Earl and Irene (Weible) Dossett in Barstow, CA. Ted graduated from Springdale High School in 1983 and went on to serve his country in the United States Air Force during the Gulf War from 1987 to 1991. He went on to work for Arkansas Transmission in Springdale, Ar. Ted later opened Walker’s Service Center and has served his community for the past 24 years. He was married to his beloved wife, Patricia (Trahan) for 20 years. Ted was a loving husband, father, son, brother, friend, and was an avid fisherman. His loss is deeply felt. He will be always remembered and greatly missed. Ted is survived by his wife, Patricia and six children: Tiffany and husband Ray Ford of Rogers, AR; Steven Dossett of Pea Ridge, AR; Skie Pina of Bentonville, AR; Jessica Maynard, Lillian Dossett, Benjamin Levi Dossett all of Gentry, AR. Ted is also survived by parents, Earl and Irene Dossett and siblings: Walter and wife Dawn Dossett, Mark and Wife Denise Dossett, John and wife Rhonda Dossett all of Springdale, AR. He is missed by many other aunts, uncles, nieces, nephews, cousins, and friends. Ted was preceded in death by his grandparents and sister, Jennifer Grimsley. Visitation will be Thursday, September 24th, 2020 from 4 to 7 pm at Lakeview Baptist Church in Cave Springs, Ar. A closed private funeral service will be held Friday, September 25th. Interment will be at Spring Creek Cemetery. Online condolences can be left at www.siscofuenral.com

The family of Ted S. Dossett created this Life Tributes page to make it easy to share your memories.

Send flowers to the Dossett family.