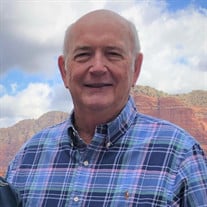 Ted Lee Wiggins, age 76, went to be with the Lord on Wednesday, January 19, 2022. He was born September 29, 1945 to Alva and Minazelle (McKeen) Wiggins in Paris, AR. Ted graduated from Paris High School in 1963, graduated from Oklahoma State University, and earned his Veterinary Medicine Degree there in 1970. Ted and Kay moved to Springdale after graduation and made this their home. Ted was a veterinarian in Springdale until he retired in 2011. Ted’s faith was a fundamental part of his life, and he was an active member of FBC / Cross Church in Springdale for over 30 years. Ted enjoyed spending time with his family, traveling, quail hunting, fishing, spending time at the farm, and feeding the birds. Activities outside of his practice included serving on the Springdale City Council for 14 years and on the board of Shiloh Christian School for six years. Ted was also one of the founders and president for four years of the NWA Bird Hunters Association, and one of the original investors in the NWA Animal Emergency Clinic. Ted was a member of the Springdale Rotary Club, where he was honored with the Paul Harris Fellow Award for his extraordinary service. Ted was blessed to have married his High School Sweetheart, Kathryn (Kay) Allen, and they just celebrated their 55th Wedding Anniversary in December. He is predeceased by his parents, and by an older brother, Hershel Wiggins of Paris. He is survived by his wife Kathryn; son Marc Wiggins (Jennifer) of Springdale; daughter Melanie Moseley (Theodore) of Orlando, FL; grandchildren Tyler Wiggins (Madison) of Olathe, KS; Isaac Sprang (Erika) of Tampa, FL; Reagan Walters (Joshua) of Bentonville; Erin Sprang of Savannah, GA; and Adam Sprang of Orlando, FL; brothers Tom Wiggins (Patty) of Booneville and Dr. James William Wiggins of Little Rock. Visitation will be held at Cross Church Springdale Chapel on Thursday, January 27, 2022 at 10:00 am with a Celebration of Life Service at 11:00. The family asks that any memorial gifts be sent to Leukemia Lymphoma Society (LLS.org) or The American Heart Association (www.heart.org). Online condolences may be left at www.siscofuneral.com

Ted Lee Wiggins, age 76, went to be with the Lord on Wednesday, January 19, 2022. He was born September 29, 1945 to Alva and Minazelle (McKeen) Wiggins in Paris, AR. Ted graduated from Paris High School in 1963, graduated from Oklahoma State... View Obituary & Service Information

The family of Ted Lee Wiggins created this Life Tributes page to make it easy to share your memories.

Send flowers to the Wiggins family.