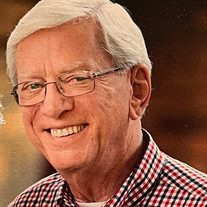 Theodore "Ted" M. Schneider of Springdale, Arkansas, was born on November 7th, 1937, in Enid, Oklahoma. On January 26th, 1968, he and his wife Janet "Jan" Eastwood were united in Holy Matrimony in Ponca City, Oklahoma. He departed his earthly body for Heaven in the early morning of Thursday, January 27th, 2022. Ted, a beloved husband, father, grandfather, great-grandfather, and friend, had many hobbies and passions. He was a member of the board at Cross Church, where he and Jan have been members for nearly 40 years. Above all things, he cherished his relationship with his Lord and Savior, Jesus Christ. Serving with his wife of 54 years, they led About Hope Ministries. Ted also enjoyed spending time each morning at Susan's in Springdale with his breakfast buddies. Ted had a knack for tinkering repairing broken things, most recently taking up the hobby of restoring antique Emerson Fans. He was invested in his American Osage Indian heritage, visiting the Reservations regularly. Among his favorite pastimes was traveling out west with his wife. Frequent destinations they enjoyed together included New Mexico, Arizona, and Colorado. Ted was preceded in passing by his parents, Theodore R. & Genevea Schneider, along with his sisters, Genevea Mae Key & Mari Vonne Hirst, and his son, Ken Schneider. He is survived by his loving and devoted wife, Jan Schneider, as well as his son and daughter-in-law, Wade & Lori Schneider. He will be dearly missed by his grandchildren, Jessica & Nate Farber, Brooke Schneider, Kaysan & Jason Eckels, and Rachel Schneider, and his great-grandson, Jameson Farber. He is also survived by his adopted son, Anthony Martin. He is survived, as well, by his adopted grandchildren and great-granddaughter, Adam Martin and Heather & Ethan Barnes, and Harper Martin. His nephews and their wives Tim & Pam Key and Ken & Nancy Hirst survive in his passing, along with his cousins Tom & Mary Wheeler. Ted's life will be remembered and honored on Monday, January 31st at Cross Church Springdale. Visitation will begin at 12pm CT, with service at 1pm CT. In lieu of flowers, voluntary financial gifts to the Ted Schneider aboutHOPE scholarship would be welcomed. This scholarship would be used for individuals who could not afford to attend a HOPE conference and who are seeking an overcoming life in Christ.

Theodore "Ted" M. Schneider of Springdale, Arkansas, was born on November 7th, 1937, in Enid, Oklahoma. On January 26th, 1968, he and his wife Janet "Jan" Eastwood were united in Holy Matrimony in Ponca City, Oklahoma. He departed his earthly... View Obituary & Service Information

The family of Theodore M. Schneider created this Life Tributes page to make it easy to share your memories.

Send flowers to the Schneider family.