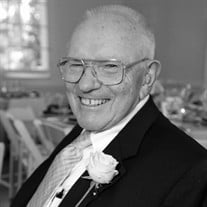 Vernon Lott, beloved spouse of Shirley Lott, Springdale, AR passed peacefully into eternal life on January 21, 2022. Born on May 16, 1928, in Ink, Arkansas, he lived an adventurous, full, and faithful life. At 17, he joined the United States Army Air Corps/US Air Force and served his country at the end of World War 2 and throughout the Korean War, promoting to the highest enlisted rank of Master Sergeant, before retiring with 20 years of dedicated service. It was during his military career that he met the love of his life Shirley Van Valkenburg, whom he married on October 8, 1955, and lived 62 years in wedded bliss until her death in 2017. Vernon earned his bachelor’s degree from Loyola University and master’s degree from California State Polytechnic University while working and raising a family of 9 children. He worked a few years at MacDonald-Douglas in aerospace and astronautics before being hired at Covina Valley Unified School District where he served as the Director of Human Resources for over 20 years. During his tenure with the school district, Vernon made a positive difference in the lives of many within the educational field as best represented by those who remained in contact with him for advice long after his retirement. Vernon and Shirley were avid travelers visiting all 50 US states and much of the world. Vernon loved gardening and building things, making jams and jellies, and sharing his opinions. Vernon was active in service for others throughout his life including spending several months volunteering with Maryknoll Sisters in Africa and many years working at the annual Maryknoll bazaar. But perhaps his most meaningful service work has been his time spent working at the annual Tontitown Grape Festival and at the St. Joseph’s church food pantry where he volunteered preparing food for the needy of his community in Tontitown. Vernon was also proud to assist in fundraising for the St. Joseph’s school in Fayetteville and enjoyed immensely planning and inviting friends and family for several tables over the years. When not traveling or spending time with their children and family members, Vernon and Shirley enjoyed attending theatre and were active supporters of Theatre of the Ozarks, Theatre Squared, Crystal Bridges, Walton Arts Center, and University of Arkansas theatre. Shirley and Vernon have all 9 children surviving, including: Anastasia, Maryknoll Sister, Patrick (spouse Kim), Damien (spouse Mary Ellen), Bridget (partner Amy), Rebecca (partner Warren), Gretchen (spouse Joe Romano), Catherine (spouse Ronald Heath), Christopher, and Jordan. He is also survived by his brothers Bobby and Johnny, sister Edna, fifteen grandchildren and two great grandchildren. Vernon is preceded in death by his beloved spouse Shirley, his parents Lee and Ruby Lott, his brothers Herman and Leo and sister-in-law’s Sandy Lott and Edith Lott. In lieu of flowers, his family asks you to please consider donating to Maryknoll Sisters, or St. Joseph’s Catholic School, Fayetteville AR. Visitation will be on Tuesday, January 25, 2022, at 6:30pm with Rosary following at 7:00pm. Mass of Christian Burial will be held on Wednesday, January 26, 2022, at 10:00 am. Father John Connell and Father Jon Miskin will preside with all services held at: St. Joseph Catholic Church, Tonti Town, AR. A reception will be held in the St. Joseph Church Hall immediately following mass. Private interment at Fayetteville National Cemetery will be conducted on Thursday, January 27, 2022. Online condolences may be left at www.siscofuneral.com

Vernon Lott, beloved spouse of Shirley Lott, Springdale, AR passed peacefully into eternal life on January 21, 2022. Born on May 16, 1928, in Ink, Arkansas, he lived an adventurous, full, and faithful life. At 17, he joined the United States... View Obituary & Service Information

The family of Vernon Lott created this Life Tributes page to make it easy to share your memories.

Send flowers to the Lott family.