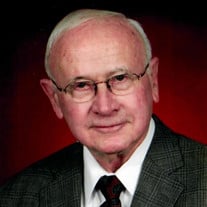 Walter Lee Turnbow was born on May 26, 1924 in Russellville, Arkansas and died on September 9, 2019 in Springdale, Arkansas. He was the son of James Walter and Florence Colburn Turnbow. Walter graduated from Bentonville High School in 1942 and subsequently attended the University of Arkansas in Fayetteville. He served three years in the Army Air Force during World War II stationed in England. After his military service, Walter completed college where he earned a BSBA in accounting. Walter began work at Steele Canning Company in various positions, ultimately becoming president of the company. He was responsible for securing rights to the Popeye cartoon character to be used on the spinach label for Steele Canning Company. Walter became Vice Chairman of the Board and Chief Executive Officer of First State Bank of Springdale in 1977. He retired as Chairman of the Board of First State Bank in 1992. He served as past Advisory Director for NationsBank of Northwest Arkansas, Director Emeritus and Past President of Ozark Food Processors Association and Past Director of the National Food Processors Association. A member of First United Methodist Church of Springdale, Walter served on the Staff-Parish Committee, was Chairman of the Finance Committee, Treasurer of the Church Foundation, Chairman of the Commission on Education, Church School Superintendent and a member of the Administrative Board. Walter loved his community and lived a life of service. He was a 32' degree Mason. He served as Chairman of the Springdale School Board, Chairman of the Arkansas State Board of Education, Chairman of the Springdale Water and Sewer Commission, President of the Springdale Chamber of Commerce, and was a Director of the Arkansas State Chamber of Commerce, a Director of the University of Arkansas Agricultural Developmental Council and a Director of the Arts Center of the Ozarks. Walter was also Chairman of the Board of Northwest Medical Center and a Director of the Northwest Arkansas Radiation Therapy Institute. He served as a member of the Urban Renewal Commission, a member of Beaver Water District Board of Directors, a member of the City of Springdale Industrial Commission, a member of Community Care Foundation, a member of Northwest Arkansas Council, a member of Springdale Rotary Club, a member of the Springdale Public Facilities Board and past Chairman and current Director Emeritus of the Endeavor Foundation. Numerous awards and honors marked his extraordinary life. He received the Arkansas State Chamber of Commerce Award for Exceptional Accomplishment in the Community Development Program, the Springdale Chamber of Commerce Award for Outstanding Civic Service and Leadership and was inducted into the University of Arkansas Chapter of Gamma Sigma Delta. The Northwest Technical Institute named its library the "Walter Turnbow Library" in recognition of his contributions to vocational education. The Springdale Water and Sewer Commission dedicated its office facility as the Walter L. Turnbow Administration Building in recognition of his distinguished service and community leadership promoting health, education and welfare for the citizens of Springdale. Walter was also honored as a Springdale Public Schools Education Foundation's Cornerstone Patron. In 2006 the Walter Turnbow Elementary School welcomed its first students. One great joy for Walter was being able to read to these students during the early days of the school. On his 90' birthday, the City of Springdale dedicated the Walter Turnbow Park in his honor. Walter is survived by his wife, Clara Elizabeth Hubach Turnbow, to whom he was married on November 22, 1951, and was a loved and loving husband for 67 years. He is also survived by his beloved daughters, Teresa Turnbow Dombrowski (Ronald) of Chester, Virginia and Dr. Karen Turnbow of Hoover, Alabama; granddaughter, Kimberly Dombrowski Kessler (Pate); great grandchildren, Cora and Aaron Kessler; nieces, Linda Bailey, Pat Zakavec and Rose Lebeda. He is predeceased by his parents, sister, Walcie Turnbow Howell, brother, James Turnbow and nephew, David Howell. A Celebration of Life will be held at First United Methodist Church of Springdale on Thursday September 12, 2019 at 1:00 pm with a private burial prior to the service. The family will receive friends at the church following the ceremony. Memorials can be made to Springdale Public Schools Education Foundation, Walter Turnbow Endowment for Education, 800 W Emma Ave., Suite 328, Springdale, AR 72764; First United Methodist Church, 206 W. Johnson Ave. Springdale, AR 72764; or Circle of Life Hospice, 901 Jones Rd., Springdale, AR 72762. Online condolences may be left at www.siscofuneral.com

Walter Lee Turnbow was born on May 26, 1924 in Russellville, Arkansas and died on September 9, 2019 in Springdale, Arkansas. He was the son of James Walter and Florence Colburn Turnbow. Walter graduated from Bentonville High School in 1942... View Obituary & Service Information

The family of Walter Lee Turnbow created this Life Tributes page to make it easy to share your memories.

Send flowers to the Turnbow family.