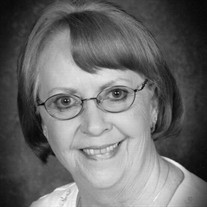 Wanda Lea Boatright died January 11th, 2021, in Fayetteville, Ark. She was 79. It was a peaceful and beautiful end to a remarkable life. She was described by one relative as “like a slow-moving river.” She was never hurried or frantic, and had a deceptively strong will and resolve. She was a calm, peaceful presence to everyone who had the pleasure to be in her company. She made friends wherever she went, and countless people looked to her as an example for how to be a good mother, wife and person. She had a strong and abiding faith in God, which carried her through hard times in her life. She took great pleasure in using her peaceful persuasion, earnestness, honesty, charm, and unyielding determination to accomplish numerous remarkable things in her life. She was born Wanda Lea Clark on March 31st, 1941 in Boxley, Arkansas, and was very proud of her Newton county roots. As a young girl her father Fay Clark took her everywhere, and it was during those years he taught her how to have a good time. She never forgot that having fun is an important part of life. She used to watch the fancy railroad passenger cars go by late at night and dream that she’d find a way out of the poverty she was raised in, and she eventually did. She moved to the Kansas City area during her teenage years and loved life in the big city. Her family moved back to Arkansas when she was in high school and she met her future husband Robert Boatright. After graduating from Springdale High she talked her way into being a secretary at Daisy B.B. Gun in Rogers, back when Daisy was a big-time, worldwide operation. Although she loved the excitement of her work life, she left to raise her first-born son, Clark. They moved to Tulsa for a short time, but returned to Arkansas and settled in Fayetteville to have their second son, Paul. Moving again to Springdale, she was delighted to create the home and family life she’d always dreamed of. She returned to her work life a few years later and thoroughly enjoyed her time at First State Bank in Springdale. In the 1980’s she had hard and challenging times. But typical of Wanda, she refused to give up. In the 90’s she found her next chapter as office manager for her son Paul’s band Punkinhead. She was with them almost eight years, and would tell stories of her adventures from this time for the rest of her life. She acted like a den mother to all the band members and many of their fans and friends. She enjoyed every day of that exciting chapter in her life. Then in 2001 her son Clark died. And though it would be her most difficult year, her faith and character sustained her. From 2004 until her death she enjoyed the last delightful chapter in her story, her time with her three grandchildren who were her pride and joy. Salute, and farewell dear Wanda. We will see you again someday. Preceded in death by father Fay Clark, mother Vernie Clark, sister Renda Lou Clark, husband Robert Boatright and son Clark Boatright. She is survived by son Paul Boatright, daughter-in-law Brooke Boatright, grandsons Freeman and Coltrane Boatright, granddaughter Farah Boatright, sister Linda Allen, nephew James Allen, niece Amy Allen and nephew Randy Boatright. A future memorial service is planned for fall 2021. If you would like to donate in her name, any funds raised will be distributed to all the nurses and staff who cared and attended for her as she passed so peacefully. Mail to Wanda Boatright, 2480 Indian Oaks Trail, Springdale, Arkansas 72762 or PayPal to [email protected] Online condolences may be left at www.siscofuneral.com

Wanda Lea Boatright died January 11th, 2021, in Fayetteville, Ark. She was 79. It was a peaceful and beautiful end to a remarkable life. She was described by one relative as &#8220;like a slow-moving river.&#8221; She was never hurried or frantic,... View Obituary & Service Information

The family of Wanda Lea Boatright created this Life Tributes page to make it easy to share your memories.

Send flowers to the Boatright family.