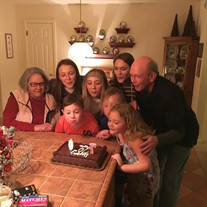 William “Bill” Noah Carter Jr., 72, of Springdale, AR, died Wednesday, June 2, 2021 in Juan Dolio, Dominican Republic. He was born December 18, 1948, in Dallas, Texas, to Noah and Shirley Carter. He was preceded in death by his father, Noah Carter, and his daughter, Cheryl Carter Harrop. Bill will be missed as a husband, son, brother, father, grandfather and friend. He was known to be very active in the sporting events of his grandchildren, who lovingly referred to him as “Pops.” Whether it be gymnastics meets, baseball or softball tournaments, basketball camps, golf tournaments, or football season halftime shows, he could be seen cheering from the sidelines. He loved to fix things around the house and had a knack for improving the spaces around him. Bill served in the United States Navy from 1967 to 1975, working in the National Security Agency and later worked for Budgetext Corporation for many years following his retirement from the Navy. He loved being the public address announcer at high school football and basketball games for the Springdale Bulldogs and eventually for the Springdale Har-Ber Wildcats as well. He served the Springdale community in this way for over three decades. Springdale fans loved “the voice” of the Bulldogs. He was inducted into the Springdale High School Athletic Hall of Fame in August of 2014. Bill was also very active in the Kiwanis Kids Day Football Program. He is survived by his wife, Judy Anderson Carter, whom he married on December 26, 1969; son, J.R. Carter and his wife Shelby; six grandchildren, Jane Ellen Harrop, Lilly Olivia Harrop, Eva Claire Harrop, Noah Paul Carter, Robert “Will” William Carter, and Mattie Ila Carter; his mother, Shirley Ray Galloway of Hewitt, TX; and sister, Kim Torstrick, of Waco, TX. Funeral services will be held at 10 a.m. on Friday, August 13, 2021 at Sisco Funeral Chapel of Springdale. Burial will be in Bluff Cemetery.

The family of William "Bill" Noah Carter created this Life Tributes page to make it easy to share your memories.

Send flowers to the Carter family.