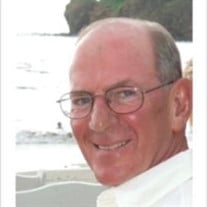 William “Bill” Jaycox, 75, of Springdale, passed away on March 25, 2022 at Circle of Life Hospice in Springdale, Arkansas. He was born on August 17, 1946 in Ironton, Missouri to Paul Henry Jaycox and Leota Eloise (Parker) Jaycox. Bill was an Air Force veteran who enlisted in 1965 following his graduation from high school. After basic training at Lackland AFB in San Antonio, Texas, he spent six months at the Armed Forces Intelligence Training Center in Denver at Lowry AFB, where he graduated at the top of his class and moved to Shaw AFB in South Carolina, then to the Tan Son Nhut AFB in Vietnam on the edge of Saigon where he served in the early days of the Tet Offensive. He was honorably discharged as a staff sergeant from the Air Force and received the Air Force Commendation Medal for his service. He and Kathleen “Kathy” Connelly eloped in 1966 to begin a lifetime of adventure that took them from South Carolina to Massachusetts, St. Louis to LeMars, Iowa; finally settling in Springdale, Arkansas. His professional career began with McDonnell-Douglas where he simultaneously raised a family and completed his college degree at night from the University of Missouri-St. Louis, graduating summa cum laude. He went on to work at Universal Match Corporation and Schnucks supermarkets, joining Harker’s Wholesale Meats as an executive officer which brought them to LeMars, Iowa. He retired from Tyson Foods, Inc., as Chief Human Resources Officer after a long successful career playing an integral part of the company’s growth and expansion. As a principled leader, Bill invested his time, talents and energies into each community in which he lived and worked. While in Iowa, he served on the LeMars City Council and was selected for the Iowa Governor’s Task Force on Labor & Economic Development. After his move to Northwest Arkansas, Bill served as a board member, fundraising committee for Ronald McDonald House Charities of Arkoma (RMHC), board member of United Way Foundation of NWA, and supported Circle of Life Hospice during the capital campaign that led to the establishment of the Springdale and Bentonville locations. Of all of his accomplishments, Bill was most proud of his family and instilled the same fierce love, laughter and loyalty in his wife, children, grandchildren and extended family, both related and chosen. His favorite memories were family holidays together, surrounded by the smells and sounds of the season, engaged in highly competitive board games (where there were many “questionable” reviews of the rules) and tons of laughter. As Bill often remarked, he lived an active life filled with great stories and memories that often included fishing, golf, tennis, and beach and ski vacations traveling with friends and family. His warm and hearty laugh, quick wit and sardonic humor could be expected in every encounter. While not an Arkansas native, Bill adopted the Arkansas Razorbacks as his home team and was an avid basketball and football fan. For many years, he could be found most days at Springdale Country Club with his regular “morning” golf group where the bragging rights far outweighed the dollar bets. Bill was raised in faith, becoming a believer at eight years of age under the guidance of his grandfather, Clifford Parker, who was a circuit preacher in Missouri. After marriage, he was confirmed in the Catholic Church. A man of strong work ethic and quiet faith, he believed more in living his faith through his actions than his words. He and Kathy were past members of St. Rafael Catholic Church where Bill sang in the choir. He is preceded in death by his parents and one brother, Jerry Jaycox, and many friends and colleagues. Survivors include his wife, Kathy Jaycox of Springdale; a son, Stacy Jaycox of Springdale; a daughter, Wendy (Jaycox) Davidson and her husband, Thor, of Wheaton, IL; his sister, Alice Lore (husband Phil), of Many, LA; brothers Virgil Jaycox (wife Christina) of Rochester, NY and Joe Jaycox (wife Jo) of Bella Vista, AR; and three grandchildren, Anders Davidson, Brenna Davidson, Matthew Jaycox (and wife Lydia) and one great grandchild on the way. He is also survived by many extended family and friends on whose lives he’s made an enormous impact. There will be a celebration of life on Sunday, June 12th from 4-7PM at Springdale Country Club. Memorial donations can be made to Circle of Life Hospice, Life Styles, Inc. and Wounded Warrior Project. https://nwacircleoflife.com/donatesupport/#donatenow https://www.lifestylesinc.org/donate https://support.woundedwarriorproject.org Online condolences can be left at www.siscofuneral.com

The family of William "Bill" Jaycox created this Life Tributes page to make it easy to share your memories.

William “Bill” Jaycox, 75, of Springdale, passed away on March...

Send flowers to the Jaycox family.