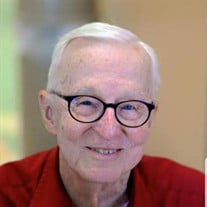 William Hunter Ussery, husband, father, grandfather, friend, known to many as Bill, Big Bill, Dad or Granddad, went to be with his Savior on February 24, 2020. He was personally led to meet Jesus on June 30, 1946 under the wing of a SNJ Texan Airplane by his Navy buddy Calvin Stout at Pensacola Naval Air Station, Florida. That one event changed the course of his life forever. “If you confess with your mouth Jesus as Lord, and believe in your heart that God raised Him from the dead, you will be saved; for with the heart a person believes, resulting in righteousness, and with the mouth he confesses, resulting in salvation. For the Scripture says, “Whoever believes in Him will not be disappointed. Romans 10: 9-11 Bill was born at Mullins Well, Mississippi on August 7, 1927 to William Leander Ussery Jr. and Sarah Mehaffey Ussery. He had one sister, Sarah, one niece and two nephews. After his stint in the Navy, Bill struck out for John Brown University in Siloam Springs, Arkansas where he graduated with a degree in Electrical Engineering. It was also the place where he met the love of his life, Ernestine Walters. They were together for 69 years until she went on to heaven before him in 2019. Bill and Ernestine raised 5 great kids while in Springdale, Arkansas and they were always faithful members of a local Baptist church, last at Oak Grove Baptist Church. Bill was always involved whether it was a deacon, usher, teaching young boys in both Sunday School and in the mission organization Royal Ambassadors, or by using his KBRS Radio voice as the narrator in many Christmas and Easter productions. He is survived by his children Steve, Bill (Melissa), John (Pam), Nancy (Dan), David (Colleen) and grandchildren Caroline (J.J.), Jon (Meridith), Mary (Kevin), Sarah, Josh, Rebekah, Peter (Kristie), Bethani, Merri (Laquan), Paul (Cheer), Mandy (Brian), Tim (Kat), Sally, Becky (Treynor) and great-grandchildren Hannah, Lillian, Cadence, Callie, Jerren, Jordon, Adelaide, Rand, Avalynn, Grace, Caden, Jesse, Vivi, Emi. Bill prayed for all of his family everyday. On the days leading up to his passing Bill spoke these words regarding Jesus: “He has sustained me through these many, many years. I have failed Him but He has never failed me. For these 92 years my life has been in His hands and when He’s through with me He’ll bring me home. I’ll walk with my friends and family and loved ones.” Funeral services will be Saturday, February 29, 2020 at 2:00 P.M. at Sisco Funeral Chapel of Springdale with Pastor Guy Durkee officiating. Visitation will be Saturday beginning at 1pm at the funeral home. Online condolences may be left at www.siscofuneral.com

William Hunter Ussery, husband, father, grandfather, friend, known to many as Bill, Big Bill, Dad or Granddad, went to be with his Savior on February 24, 2020. He was personally led to meet Jesus on June 30, 1946 under the wing of a SNJ Texan... View Obituary & Service Information

The family of William Hunter Ussery created this Life Tributes page to make it easy to share your memories.

Send flowers to the Ussery family.